Along the gallery leading to the exit, it’s exhibited together with less important paintings, an embroidered example of excellent manufacture for its dimensions and for the opulence of the embroidery, which is for sure a really exclusive piece of this big and rich museum.

10.1  Neapolitan area of interest, Drape with pagan divinities, 18th  cent., embroidered linen and silk painted in tempera, coming from the Cathedral in Lanciano 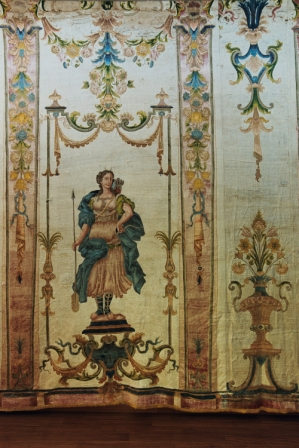 The drape developing on a surface of more than 50 sq.m, is made of five elements sewn together on which four pagan goddesses are portrayed; Ceres, Juno, Diana and Amphitrite, maybe part of a wider cycle. Stylistically speaking it’s datable around the first half of 18th century, thus before the foundation of the famous silk factories of Reale Manifattura of San Leucio.

Probably made for covering the walls of an important Neapolitan palace, its realization must have been interrupted for some reasons and thus it remained unfinished. It’s found in Lanciano in Mons. Francesco Maria de Luca’s will , the Archbishop of Lanciano between 1818 and 1839, in the years in which the front of Madonna del Ponte Cathedral was reconstructed. Until the end of the 80s it was currently unrolled on the front during the most important and solemn occasions.

We have just documentary testimonies for similar samples.

Santa Maria Maggiore, object of a  controversial and questionable “restoration” at the end of the 60s, was also deprived of many altars of excellent manufacture that only recently have been recovered and recomposed. This Saint Micheal altar piece comes from  the big De Giorgio family’s altar, a rich and powerful family in the past centuries and that provided the parish church with many Archbishops. This altar piece was commissioned by Michele de Giorgio, an important exponent of the family who was the mayor of the city at the beginning of the 19th  century. After being collocated for many years in the Civil Museum, it has been subsequently recovered and exhibited in the museum.

Tweet
More in this category: « Ninth room The Treasure »