The Worship of Saints

The sixth room is dedicated to the theme of the worship of saints and it shows many pieces coming from Old Lanciano parishes which were abolished in the 19th cent. and then demolished, as Saint Laurence statue, of the second half of 15th cent. , Saint John one from the 14th , and Saint Maurice altar piece painted in the half of the 17th  cent.

The Oratorio dell’Addolorata in Santa Lucia instead has provided the museum with Mark and Luke Evangelists busts dated 1778, together with two ovals with Saint Joseph and Saint Francis of Paola. In the showcase we can find liturgical objects, chalices, pix and processional crosses dated from 14th  to 19th  centuries.

Leaving the room we find an altar piece representing the Miracle of the Host profanation coming from S. Agostino Church; it’s closely connected to the local religious tradition, it’s in fact the only painting known showing the second Eucharistic Miracle that took place  in Lanciano in 1273 and it’s conserved in Offida.

Coming from different places of worship on the Diocesan territory, the chalices stand out for the refinement of their manufacture. They are chronologically exhibited from left to right, from top to bottom thus giving the possibility of appreciating the stylistic evolution of these objects over three centuries, from the first 17th cent. to the first 19th cent., moving from the mannerist style to baroque and from baroque to definitely neoclassical forms. The centre punches remind of the names of more famous Neapolitan silversmiths from different periods.

As the chalices also the pix, that is to say liturgical vases in which the consecrated hosts were kept, have come from different places of worship on the Diocesan territory and even if lower in number they stand out as well for the refinement of their manufacture, in particular the ones carved with the symbols of the passion from the Scognamiglio’s Neapolitan workshop. They are chronologically exhibited from left to right, from top to bottom thus giving the possibility of appreciating, even in this case,  the stylistic evolution of this object over three centuries starting from the first one, coming from S. Lorenzo Church, extraordinarily signed by the silversmith Ciucci and dated 1579. The centre punches remind of the names of more famous Neapolitan silversmiths from different periods. 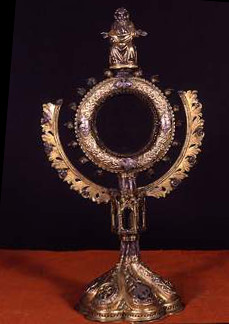 This high value monstrance, the oldest among the ones exhibited in the showcase, is a good testimony of the excellence of goldsmith masters of the past centuries even if the studies on their activity and their achievements are relatively recent. In 1890 the Gerrman scholar Leopold Gmelin, in the preface to his book “Die Mittelalterliche Goldschmiedekust in den Abruzzen”:

Come to us over the centuries, this object well represents what the same Gmelin has defined the Age of the Abruzzo goldsmithry flourishing. 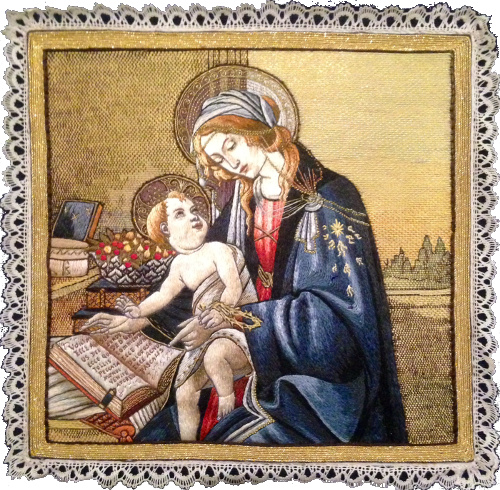 A relatively recent object, since it belonged to Pope Pio XI who died in 1939, the “pall’ a small square-shaped piece of fabric used to cover the chalice, shows in a stunning way the Virgin with Child Jesus loosely based on Sandro Botticelli’s painting of Madonna del Libro, a table datable around 1480-81 and now kept in  Poldi Pezzoli Museum in Milan.

It’s splendid and precious in the details, in fact in the open book, next to the Virgin, it’s possible to read the words written in Latin. It is almost possible to count the pages and appreciate the reflections of the veil on the Virgin’s head. A very accurate and extremely complex work, clearly made by the best  papal masters.

The processional cross is worth noting above all for its antiquity and because it allows appreciating more the near cross made by Nicola from Guardiagrele. In the recto, devoid  of the lower part, we can see the Virgin and the Announcing angel at the sides of the cross above which there is the figure of an angel, in the back the symbols of the four Evangelists, Mark’s lion, John’s eagle, Matthew’s bull, and Luke’s angel surround the figure of Christ in triumph.

The actual depiction of this cross has been included, in 2010, in the emblem of Mons. Cesare Nosiglia, the current Metropolitan Archbishop in Turin. 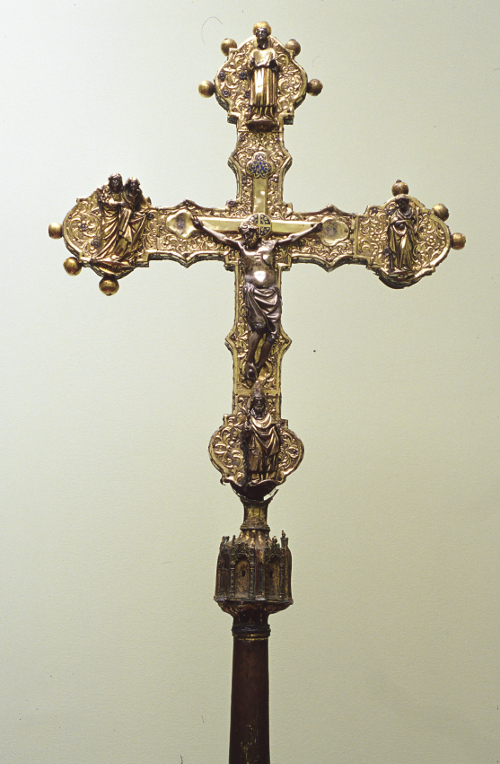 Even if studied and brought back to the right level of consideration only in the last century, the Abruzzo goldsmithry tradition has found his best representative in  the 15th cent. in Nicola from Guardiagrele who, as written at the beginning of the past century: “fu conosciuto, come Dio, soltanto per le sue opere” , to underline his extraordinary artistic ability.

As emphatically said by one of his many biographers, Nicola’s works speak about him. The processional cross of S. Agostino Church, even if much more modest than the almost contemporary cross we can admire in Santa Maria Maggiore Church, dated to 1422, is for style and design an extraordinarily innovative work if compared to the previous tradition and reveals its author’s absolutely unordinary technical ability in making completely embossed and chiseled  all-round figures, with a masterful precision.

His pieces also reveal a highly cultured personality, a skilful expert of miniatures and niellos, a great master in the iconographic portrayal of the subject represented.

6.8 Abruzzese area of interest,  Saint Maurice and the Theban  Legion, with patron, around 1650 , oil on canvas, coming from S. Maurizio Church, Lanciano. 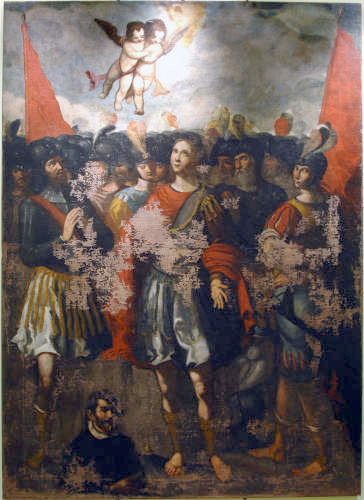 S. Maurizio Church was situated on the current Piazza dei Frentani. It must have been the first church built in Lanciano that, according to the legend of Fella and Antinori, in 610 managed in driving back the enemy Comitone, Governor of the Province on behalf of Byzantium, thanks to the miraculous intervention of the saint warrior who made the walls appear as completely surrounded by water. In the diffusion of the devotion for the Saint, originating from Thebes, and exterminated with his legion in Agaunum in the 3rd  cent.  A.D.  and who, according to the tradition,  inherited centurion Longinus’ lance, it’s possible to  track down the Longobards’ establishment on the previous byzantine communities until their total assimilation. 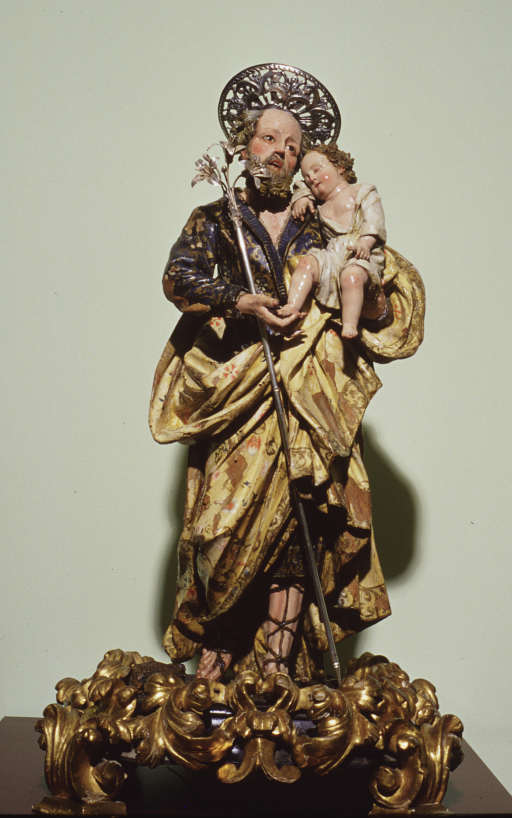 The fine sculpture comes from the Stella Maranca Antinori family, among the most ancient and richest in Lanciano, extinguished in the 60s.

To the absolute mastery at the basis of the carving of the various parts, are to be added the extreme expertise in the harmonious composition, in the colours output and in the sensitivity in portraying the expression of the Child asleep, and the tenderness of the fatherly gesture in keeping the small foot in his hands. 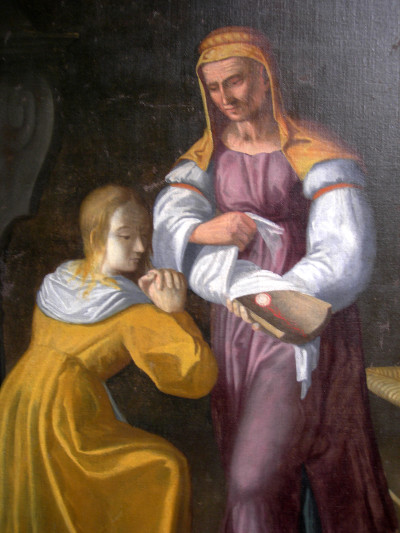 The painting represents the episode of the bleeding of the Holy Eucharist in Lanciano in 1273 when a woman called Ricciarella, wife of Jacopo Stazio, to regain the affection of her husband , on the advice of an elder woman, didn’t hesitate to put a holy host on a red hot shingle to win her husband’s love. According to the tradition, the Host started bleeding and the horrified Ricciarella wrapped everything in a rag and hid it under the straw in the barn below. When in the evening her husband tried to move the donkey into the barn, the animal, after being violently yanked, entered the barn on its knees.

Only in 1280 Ricciarella, upset, would confess her misdeed to a friar in the near S. Agostino Monastery; the friar went there and it seems he found the bundle and inside the Host still bleeding.

That marked the starting point of the worship of the Holy relics, the Host, the shingle and the rag which were moved to Offida, Marche. An important representation of the Miracle, made between 1357 and 1362 is in the Orvieto Cathedral in the Corporale Chapel.

A small chapel, annexed to the big palace belonged to the noble family of Barons Fiore Gigliani, has been built instead in memory of the second Eucharistic miracle in Lanciano , in 1583.