DEDICATED TO THE FIGURE OF CHRIST

The fifth room is dedicated to the figure of Christ and in particular to the meaning of Redemption of his sacrifice on the cross. Besides, it’s also intended to remind the visitor about the rituals of the Week Lanciano is famous for.

On  the right side there is the artistically most significant work of the whole exhibition, the Christ Carrying the Cross.  But also the Processional Cross by Giovan Angelo Scognamiglio, of 1703, in embossed, carved, chiseled silver and the two paintings of 1731 “Compianto degli angeli sul Cristo morto” e “L’Addolorata”, copied by  De Mura., are worthy of note. 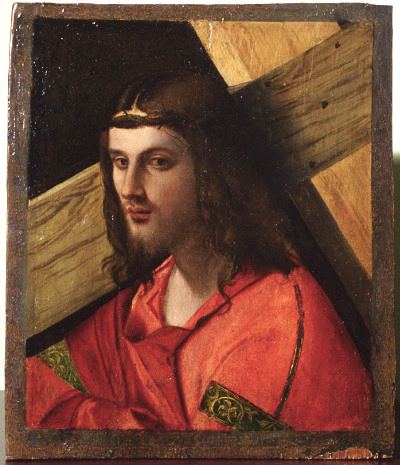 The painting was probably made for a private customer who, subsequently, had it put on one of the altars in Santa Maria Maggiore Church; it’s from there that the important painting arrived in occasion of the opening of the museum in 2002. The stylistic typology of the piece is very close to some tables on the same subject, one in the Accademia dei Concordi in  Rovigo, another in  the Museum of Fine Arts in Toledo, USA; and another one  in the Isabella Stewart Gardner Museum in Boston already in Count Zileri dal Verme’s Collection, but the final attribution, between Bellini and Giorgione, is still today subject of discussion. But the very high quality of the painting and the sensation of deep quiet coming from Christ’s strict but peaceful face are undisputed. 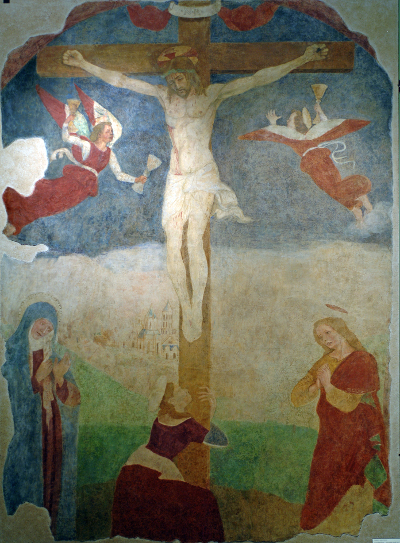 The fresco was detached from the wall of S. Mauro o del Crocifisso Church, before its demolition in the 30s. The detachment took place thanks to the scholars of the local Art School led by their teacher, with the aim of saving it from a sure destruction.

The church was an integral part of the ancient Carmelite monastic complex at the edges of  Prato della Fiera, visible in the foreground in the representation of the city of Lanciano published by Abate Pacichelli at the beginning of 18th century.

Initially collocated in the Palazzo degli Studi, it was subsequently moved to the Diocleziano Auditorium before getting the current collocation. 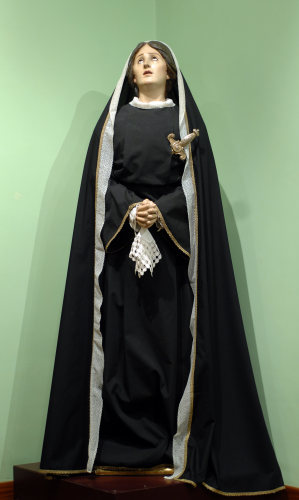 During the Holy Week rituals a particular importance is given to the use of the so called “dressed statues” that are presented as “personifications” of the Virgin and the Saints rather than mere representations. They are objects of particular worship  practices, above all in the female field, from the creation of clothes, well cared in each detail, even in the non visible parts, to the dressing ceremonies before Processions. Regarded as old fashioned expressions of faith after the II Vatican Council, they are kept in high regard as anthropological testimonies of the past centuries.