THE WORSHIP OF THE VIRGIN AND SAINTS

In the fourth room the theme of the worship of the Virgin and the Saints develops along many paintings and sculptures endowed with a remarkable historical interest and a high artistic value coming from various worship places completely disappeared today, as Saint Martin Church, or still waiting for restoration as the chapel of the Confraternita of Maria Santissima Addolorata in Santa Lucia.

From Saint Martin Church, destroyed in 19th cent., a Madonna del Rosario con i Santi Filippo Neri, Francesco Saverio, Sebastiano e Martino Vescovo, dated to around 1750, has come; it has been made by the Lancianese Francesco Maria Renzetti born in 1711 and chronicled until1751. Two sculptures showing the Piety and Our Lady of Sorrows of 1733 have been referred instead to Domenico Renzetti’s workshop ( 1679 – 1750), father of the painter Francesco Maria. 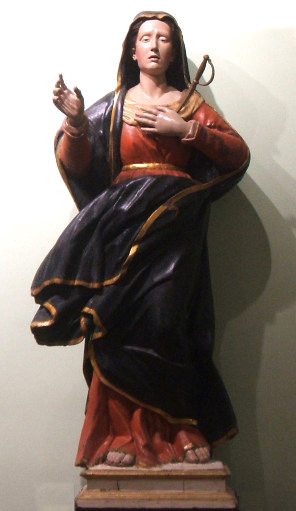 The statue was commissioned in 1733 by the Confraternita di Maria Santissima Addolorata to the Lancianese sculptor Domenico Renzetti, born in 1679 and died in 1750.

Renzetti was a  pupil of the sculptor Giacomo Colombo born in  Este in 1663  and died in Naples in  1731. In Lanciano there are two of his works Our Lady of Sorrows seems to to be connected, the Madonna della Consolazione of 1708 in S.Agostino Church for the  Confraternita di San Simone e Giuda and the Madonna della Candelora in S. Biagio for the  Confraternita dei Raccomandati.

4.1.1 Abruzzo area of interest, The seven sorrows of the Virgin, half of 19th  cent., oil on canvas, coming from S. Lucia Church, Lanciano.

The seven tondos were at first collocated around the main altar of the Chapel of Confraternita dell’Addolorata in Santa Lucia, in the neighbourhood of the village.

The first represents Simeon’s prophecy in the day of the presentation to the Temple. In Luke’s Gospel the old Simeon announces to Virgin Mary the sorrows she will suffer;

The second represents Joseph and Mary’s flee to Egypt to save Jesus, during  Herod’s persecution (2,13-21).

In the third we can see a twelve year old Jesus among the Doctors of the Temple, episode narrated in Luke’s Gospel (2,41-50). Jesus remained in Jerusalem Temple with the Doctors of Law, unknown to his parents who found him after three days. It represents the only episode described in Gospels about Jesus’ late childhood.

In the fourth there is the painting of the meeting with Jesus on the way to Calvary as told in Luke 23,27-31 and John’s Gospels «Gesù vide sua Madre lì presente» (19, 26).

The last tondo is the Laying in the Sepulchre

4.2 Abruzzo area of interest, Our Lady of the Milk, end of 17th  cent.-beginning of 18th cent., Oil on canvas, coming from the S. Agostino Church, Lanciano 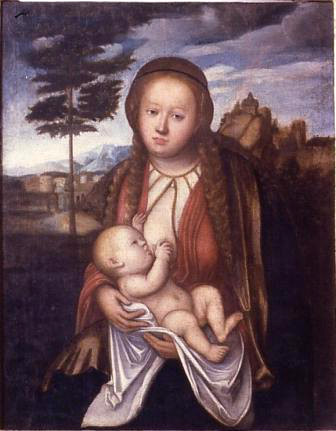 The painting, object of intense worship in the past centuries by women in labour and breast-feeding ones is a copy by Lucas Cranach the Old.

The Lady is represented with her hair down, as usual for women in labour and the drop-shaped pearl on her breast is a clear reference to the lactation. There are other similar versions of this work in private Frentano collections. 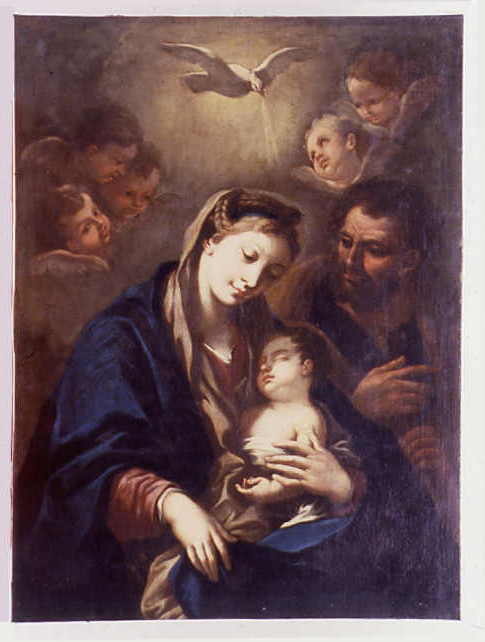 The painting, an example of extraordinary quality, comes from the private chapel of the Archbishop’s apartment and it’s for sure among the best ones in the museum collection. The subject is a moment of rest during the flee to Egypt, the Child asleep leans his ear on the heart of the Mother who, tenderly, shields him from the light with her face. The probable author is the Neapolitan Filippo Falciatore. 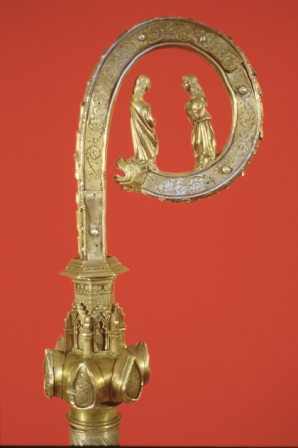 The crosier, according to what has been passed down, was given by the people of Sulmona to the first Bishop of Lanciano, Mons. Angelo Maccafani of Pereto, who run the Diocese since its institution in 1515 until 1529.

In the period of the donation the emblems of Lanciano, mixed with the Maccafani’s one (emblazoned in this way "d'azzurro, al gallo stante su di una fascia diminuita, centrata, abbassata ed accompagnata in punta da tre bisanti, il tutto d'oro") were inserted on the top of the crosier. The work is a goldsmithry masterpiece made between 14th  and 15th  centuries with a very high historical and symbolic value.

4.5  Polidoro from Lanciano, The Virgin with Child , Saint John Evangelist and Saint Nicholas, first half of 16th  cent. Oil on table. 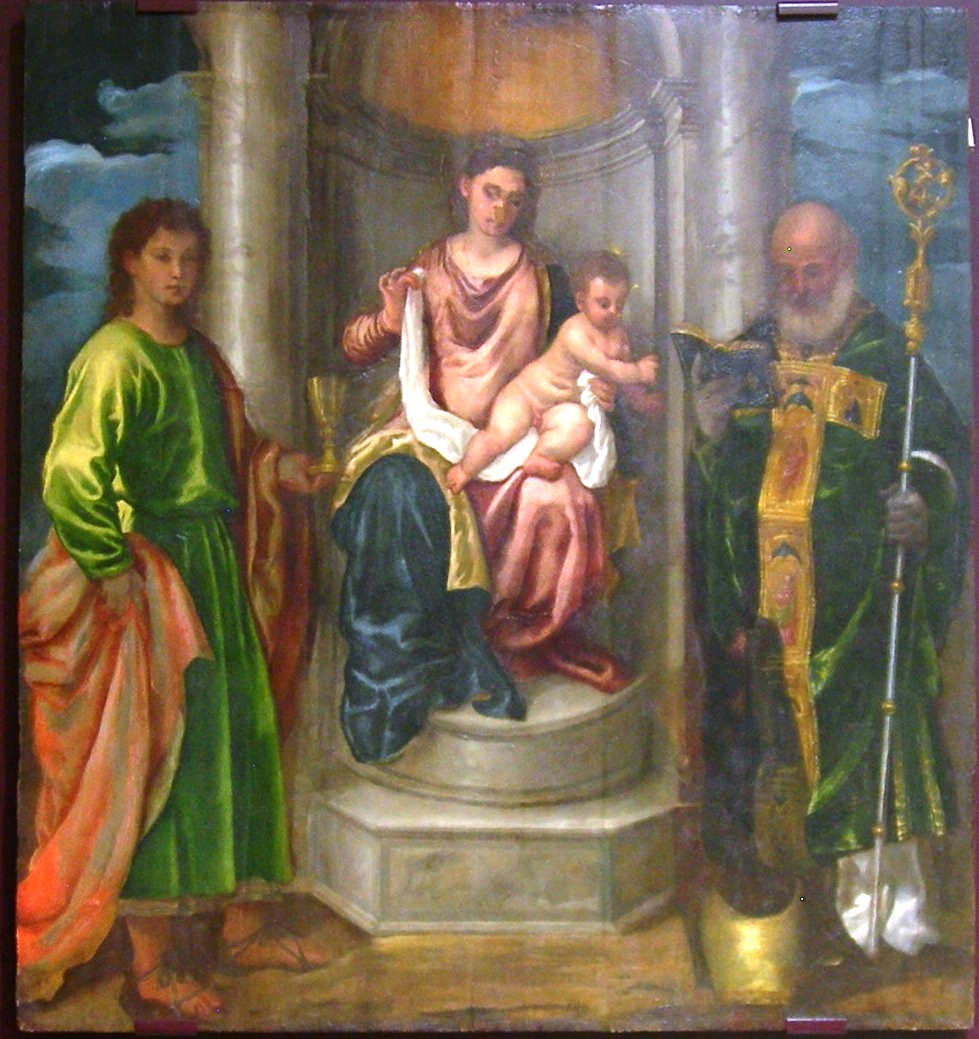 The table, portraying the Virgin with Child between saint John Evangelist and Saint Nicholas of Bari,  was until 1949 in S. Nicola Church in Lanciano, from where it was moved to L’Aquila for restoration. Only in 2009 an agreement between the Ministry and the Frentano Archdiocese allowed its return to Lanciano.

The space structure of the painting comes from similar Venetian compositions. Despite having been restored in 1952, there are still some blanks preventing an effective consideration of the piece. The colour has lost that warm tone, of Titian’s derivation, that must have had in origin and it shows today a rather flat and uniform colour.

The painting was found by Berenson in 1912, and related to Polidoro de Renzi from Lanciano, a reference then confirmed by Venturi in 192). ??

Polidoro from Lanciano was born in Lanciano around 1515 from Paolo, son of Renzo, traditionally identified as an esteemed potter. We have no news about the years of his youth and about his formation; he must have lived in the city quarter of San Pantaleone of Venice, where there was a community of immigrants from Abruzzo, around half of the 20s in the 16th  century. The presumed year of birth has been taken from his will in articulo mortis , in which he declares to be 50. He made, above all worship paintings for private customers; among his works, Il convito degli dei (Naples, Capodimonte Museum), Cristo e l'adultera (London, Walpole Collection),  La discesa dello Spirito Santo (Venice Gallerie dell'Accademia) and “Il riposo della Sacra Famiglia con l’infante Giovanni Battista” now at Louvre.