The Diocesan Museum in Lanciano was opened in 2002 to collect in its rooms, developing on a surface of 1000 sq.m, more than five hundreds pieces of the huge artistic heritage of the Ortona-Lanciano Archdiocese, testifying to the Lanciano artistic and religious history whose vision, as in a Bible of the Poor, involves the visitor in a research for the sense of life and in a rediscovery of its own roots through the language of art, both refined and popular but still bringing faith and knowledge.

The pieces displayed at the entrance show a basic element of the Museum created without taking artworks from the more than one hundred worship places in the territory of the diocese, thus removing them from the original contest they had been made for, but exclusively using for the realization of the exhibition only those pieces that in the last two centuries had been put away in depositories because substituted by other ones, as in the case of  the Saint Francis statue, or because too precious and delicate to be still used, as in the case of the processional cross or the torch-stand in polished and silvery wood, or because they had become old-fashioned after the liturgical reformation of the II Vatican Council, as in the case of the monumental pulpit.

Finally, some pieces have reached the museum as result of a donation as in the case of the 18th century Neapolitan manufacture Child Jesus with the symbols of the passion coming from the Family Stella Maranca from Lanciano. 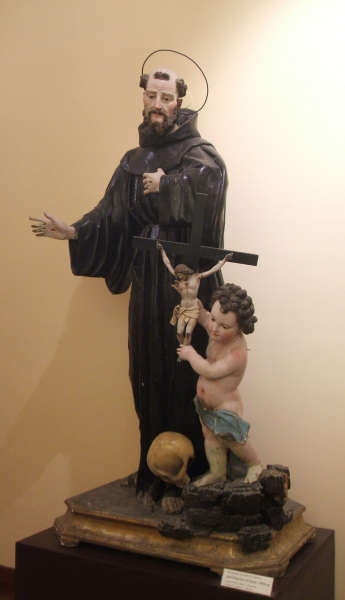 The wooden  statue of Saint Francis of Assisi made by the Neapolitan sculptor Francesco Saverio Citarelli, was in the Cathedral before 1885 and was then removed to create room for one of the statues of the Doctors of the Church given by the Lancianese Paolo Masciangelo, who had emigrated and become rich in the New World and wanted to give a sign of his gratitude to the Saint Patron commissioning them to the sculptor Nunzio Ferrari from Guardiagrele (1839 – 1910).

The representation of the Saint from Assisi, recognisable by the five lesions, is perfectly in line with Citarelli’s style which is to be placed between the 18th century iconographical tradition and the most elegant neoclassic one to which he was able to add a peculiar painting ability that led him  in 1850, to the painting chair in the Accademia di Belle Arti. 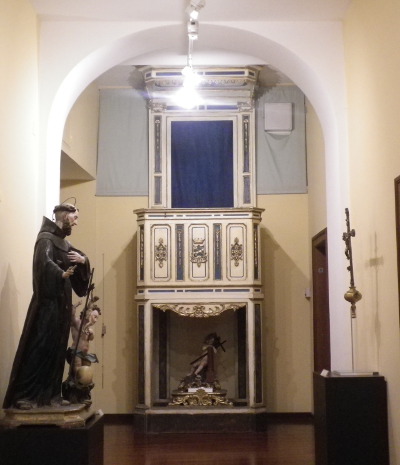 The Pulpit of the Madonna del Ponte Cathedral was made by Gabriele Bruno and the painter Emidio Vallante in 1873, on a drawing by the engineer Filippo Sargiacomo. The pulpit was a basic element of the pre-council liturgy. From the pulpit the priest preached the sermon, the only part of the Mass that could be really understood by people since it was given in the national languages and not in Latin. For this reason the priest moved on a higher structure which was often built in wood in order to work as a resonating chamber for the voice that couldn’t be amplified in any other way.