DEDICATED TO THE WORSHIP OF THE MADONNA DEL PONTE

Another reason why the Diocesan Museum of Lanciano is rightly known is because of the Museum concept it has been designed on. The objects are arranged and displayed neither in a chronological order, retracing the art history steps, nor following a typology criterion according to which there would have been a succession of paintings, sculptures and silver. The outfitting, constituting a really innovative model, has been designed so that each room showed an aspect of the local religious traditions in their artistic expression with the aim of recreating and, as far as possible, of showing the visitor the cultural background of the piece exhibited.

For this reason the second room of the Museum couldn’t but be dedicated to Madonna del Ponte, protector for the City and the Diocese.

Displayed at first at the entrance of the room, because considered the most significant objects to give evidence of the worship for the Madonna del Ponte during the centuries, we can see some paintings painted over a period of three centuries using the most different techniques on the most different materials (paper, wood and metal foil).They are just a very little part of the ones offered to the Saint Patron over the time and that, collocated in origin along the side gallery of the Church, were supposed to show  people and give them evidence of her generosity in granting graces.

They testify, with a lot of details, to daily accidents, dangers and they were sometimes actual historical documents, as in the case of the painting illustrating the bandits assault to the coach connecting Lanciano to Chieti in the post-unit period.

The precious jug is one of the most interesting pieces of the Treasure of Santa Casa del Ponte. It was used during the solemn celebration of the Pontifical Mass. Made of fusion silver later embossed, carved, chiseled and gilded, it shows the inscription with the date 1603 which makes it a very rare sample of goldsmithry of the 17th  century, most of which has been lost because of the intrinsic high value of the raw material. The scholar Franco Battistella has signalled a similar specimen in the treasure of Saint Januarius Cathedral.

Interesting in the same way the basins, in embossed and chiseled brass, dated back to 15th  century and generally indicated as Slavic manufacture even if some similar examples have been referred to northern Germany, around Aix-la-Chapelle/ Aachen. They show an undeciphered inscription in which Greek letters are mixed with gothic characters to create a word that is repeated four times. Similar samples are diffused in various other places of worship in all the region. A similar basin is conserved in the parish church of Caldari. 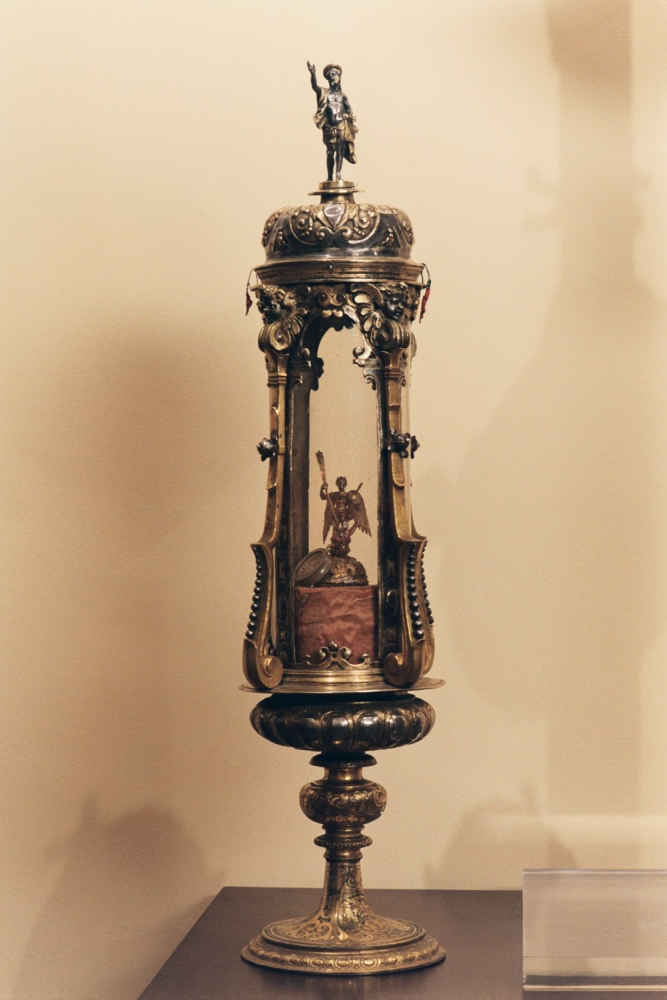 Among the goldsmithry works one of particular importance is the refined Reliquary of the Holy Thorn, by a Neapolitan silversmith of the end of 16th century, showing on its basis the symbol of the customer, the archbishop Paolo Tasso and conserving inside some thorns from Christ’s crown.

On the first Sunday of May, as told by De Giorgio in his "Cronaca delle chiese di Lanciano", this reliquary was solemnly carried in procession till the Church in Iconicella, where it was exhibited all day long and during the public calamities together  with the vase-shaped reliquary in which in 1593, Mons. Tasso had a portion of Saint Pantaleon’s blood conserved, obtained by the Ravello Bishop De Curtis after paying the notable amount of 40 ducats.

The exhibition of the relics was reserved to the most solemn moments and was actually with the Holy Thorn that on the 5th February 1799 the Sanfedist “masses”, that’s to say the supporters of Bourbon monarchy come from Lanciano from the near villages, demanded to be blessed by the Archbishop Mons. Amoroso, before a Te Deum of thanksgiving was sung  in the Cathedral.

In the middle of the room, divided in three canvases, there is the model for the lost fresco decoration of the Cathedral dome, by the Neapolitan painter Giacinto Diano (born in Pozzuoli in 1731 and died in Naples in 1803) representing the coronation of Mary, dated to 1788.

At the sides we find the only two fragments saved from the original fresco representing the head of God the Father and the head of King David. The dome of the Cathedral was discovered on 9th November 1788 as reported by the historian Omobono Bocache, “con festa, tripudio e sparo”.

The frescoes, because of the seepage in the lead covering of the dome made in 1823, already started deteriorating in 1830 and in 1847 it was possible to save only the two fragments we can see today by detaching them together with the plaster.

It’s difficult to establish with absolute precision the period of Giacinto Diano’s presence (Pozzuoli 1731 – Naples 1803) in Lanciano. According to De’ Cecco the works for the decoration of the dome and of the Cathedral vaults started in 1787 and finished in 1790 after the presentation of the model that granted him the designation. Later, between 1790 and 1791, he also painted in Naples the twenty triangular oil canvases which are at the sides of the big windows and subsequently, between 1792 and 1793, he also painted two paintings with La lapidazione di Santo Stefano and the Natività di Maria.

The painting left to his heirs was then bought in Naples in April 1839 by Giuseppe de Crecchio, member, together with the Count Saverio Genoino and with don Giacomo Festa, of the Commissione di Beneficenza, and who later gave it to the Cathedral in order to leave memory of the beauty of the lost artwork.

It was conserved, together with the only left fragments of the dome frescoes, the two heads of God and David, in the room of the Congregazione di Carità, behind the Sacristy of the Cathedral. 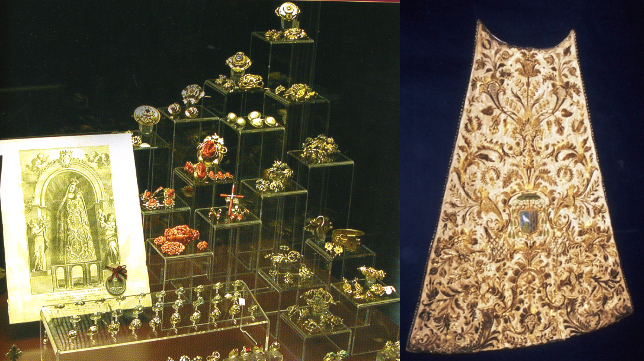 Among the main attractions of the museum there is certainly the possibility to admire the treasure of the Madonna del Ponte, rich in jewels made between the 17th  and the 20th  centuries among which the extraordinary  diamond half-moon given by the Marchesa of Castelnuovo, currently Castelfrentano, valued once as much as the rest of the treasure pieces put together.

Together with the important collection of ex-voto jewels, dated between 17th  and 19th  centuries, there are two silk dresses, one from the 18th cent. and the other from the 19th cent., which were used to clothe the Saint Patron. The first one, entirely embroidered in gold, shows the emblems of Giacomo Lieto of the Polignano Dukes, Archbishop of Lanciano from 1754 to 1769, who had a new marble altar made in 1758, in substitution of the ancient icon of the Madonna, by the famous Neapolitan marble worker Crescenzio Trinchese on a project of the engineer Gennaro Campanile, not really famous but for sure influenced by Ferdinando Sanfelice.

The dress, intended to clothe the terracotta image on the main altar, after the Loreto model, is datable to those years and stands out for the preciousness of the work and the good state of conservation.

The second dress is datable to around half of the following century and covered the mannequin statue used for processions, still used till the current one was made in 1933, in occasion of the centenary of the Saint Patron coronation.

Besides being embroidered in gold, with swirl patterns and leaves, some golden filaments have been used inside the silk weaving, making it even more wonderful. 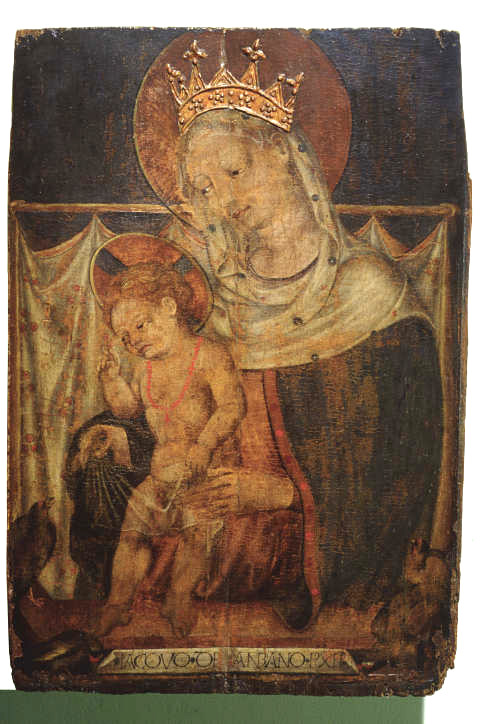 The small table, in origin in  Santa Maria Maggiore Church , had been brought to l’Aquila where it was displayed in the office of the Superintendent until when, in occasion of the opening of the Diocesan Museum, it came back to Lanciano.

The tempera painting shows Jesus’ first miracle according to the apocryphal gospels of the pseudo Matthew in which Jesus performed the miracle of giving life or resurrecting with his breath some birds he had modelled with mud.

The episode, also used by Dario Fo in his Mistero Buffo, is also understood as a prefiguration of the calling of the twelve Apostles or with a reference to the twelve tribes of Israel.

Another interesting element is the signature of the author, Jacovo de Lanzano, whose dependence from the painter Paolo Veneziano is more than evident. Unknown to the catalogues and maybe identificable with the 15th cent. painter Giacomo de Cilmis quoted by some sources.