The eighth room is dedicated to the theme of the relics and here are exposed many differently shaped reliquaries made mainly between 17th  and 19th  century. Among these , particularly interesting is the one containing the relics of Pope Celestine V. In the room Saint Augustine bust made in 1718 by the Lancianese sculptor Domenico Renzetti and a carved painted gilded baptismal wooden font belonging to the 17th  century have been placed. Particularly prestigious is the piece of furniture from the sacristy from 17th century, decorated with four tiny panels depicting landscapes and hunting scenes performed on cut paper applied on a black background. 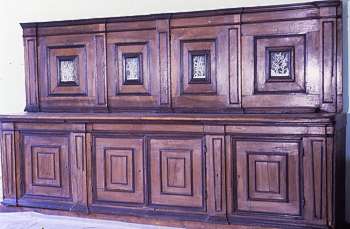 The piece of furniture from the sacristy, originally placed in S. Agostino Church, but maybe coming from one of the parishes abolished in the Old Lanciano area, exhibits in the upper part four interesting mirrored panels in which four masterpieces of applied arts have been inserted. They are four tiny frames made with paper minutely carved and applied on a black background on which landscapes and hunting scenes are depicted, with complex plant related motifs, that make it a rare set.

The most probable hypothesis regarding the provenience of this reliquary shrine made of gilded wood is that it came from Santo Spirito Church, annexed to the homonymous Celestinian monastery that now is the Polo Museale in the town of Lanciano. The Santo Spirito monastery, between the Tratturo and the Prato della Fiera, was founded by the Morronese abbot Onofrio from Comino (a castle between Rapino and Guardiagrele) that, with an act in 1293, bought the land from “Golata, Guglielmo Conte di Lanciano’s wife and Riccardo Villano, for the price of nine golden ounces”. With Pope Innocenzo X’s decease, in 1654 it was suppressed and since then it  has been used for different uses.

The veneration of the Saints relics, in the bygone centuries, was a founding and distinctive element of Christianity. They were widely spread and every worship place conserved wide collections, kept in different kinds of containers, from the monstrances, to the anthropomorphic ones that represented the part of the body of the saint contained inside, or the treasure chests, but there are also very different and very inventive kinds.

In these you can find fragments of mortal remains of the Saints or the so-called “contact relics” fragments of clothes or more generally of cloth, put in contact with the real relics to absorb the beneficial effects above all to advantage  people’s devotion.

The valuable missal, that has on the cover a reproduction of Raphael’s Madonna Sistina, conserved in the Gemäldegalerie in Dresda, was a gift to the Cathedral by the musician and composer Angelo Ciccarelli. Born in Montone in 1806, he studied in Lanciano from 1815, under the mentorship of the master Filippo Gianni.

In 1830 he went to Dresda, where he was appointed master of the Saxony Court and later became the master of the chapel choir of the Real Collegio. He was the author of many masterpieces of great artistic value.

A similar example, always with a dedication, is conserved in the Santa Maria Maggiore Church. 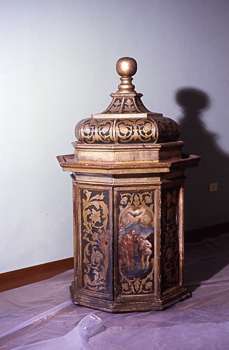 The wooden cover of the baptismal font is entirely made of wood painted with plant voluts and golden motifs on all the sides except one where we find the baptismal scene of Christ in the Jordan river.

Another very similar example can be found in the parish church of S. Nicola, while for  a third  one, even if very well documented, in Santa Maria Maggiore we ignore the current collocation.

The shrine was intended to safeguard the bath with the cathartic water and it was therefore closed with a lock. 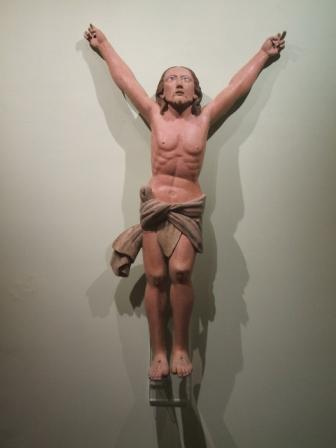 The particularity of this crucifix, recently restored thanks to a patron, is that the traits of the face are modeled on the ones of the Holy Face in Manoppello, the valuable relic that has appeared in  Abruzzo in 1506 and that since 1638 has become property of the Cappuccini order.

The cloth, that recent studies have discovered to have been made with a valuable sea-silk, is identified with Veronica’s veil as it reproduces the image of Christ with all the signs of the passion but still alive, with eyes wide open and half closed lips.

The suggestion that came from praying in front of an image presenting the real face of Jesus derives from here. 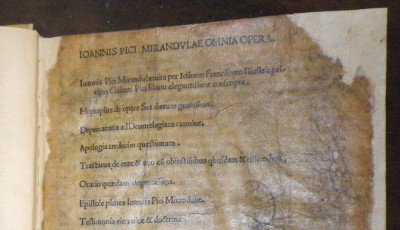 From the Capitolo Library in the Cathedral, Lanciano

The very rare volume, it seems there are three examples, is one of the treasures of the Capitolo Library in Lanciano that now is in the Diocesan Library.

Rich in rare and valuable issues, it has been object of a progressive recovery and inventory in recent years.

The book has been restored in the laboratories in the Abbey of  Grottaferrata.

8.8 Anton Ludovico Antinori, Book of memories of the City and Diocese of Lanciano, 18th cent., original hand written, from the Capitolo Library in the  Cathedral , Lanciano

The manuscript, in two volumes, has reached the collection of the Capitolare Library as a donation from the citizen  Antonio Cinerini, born in Lanciano in 1736  and here died in  1802, who had inherited it from his brother, the Primicerius  don Silvestro, elected in 1769 Vicar capitular  of the Town, praised as the expert in the completion and interpretation of the inscriptions of the historian  Omobono Bocache, who had received it from the author.

Cinerini, famous also for the institution of a study foundation for young people in Lanciano, intended to preserve a collection of testimonies to reconstruct important historical events in the town. 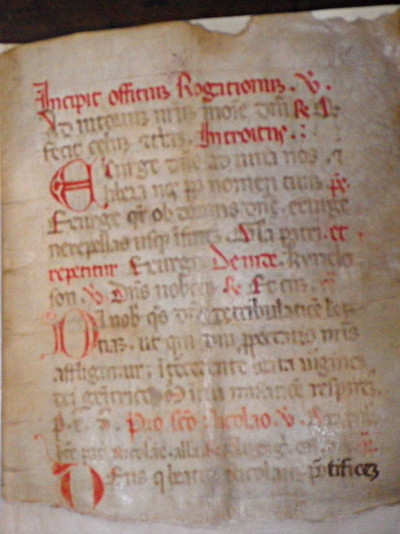 The manuscript is extremely important to reconstruct the religious history of Lanciano city in the past centuries, when it was still under the authority of Chieti Bishop. In it there is the recording of the invocations to the Saints protectors of the City and it was used during the Rogations, processional rituals that took place into the city centre and outside the walls thus providing us with a very detailed portray of the worship places and their collocation inside the city area.