In the ninth room we can see some of the many vestments belonged to Mons. Francesco Maria De Luca and the rings of Lanciano prelates that are traditionally left to Madonna del Ponte’s treasure. In the room there are also two 18th century artworks by the cabinet-maker Modesto Salvini, a tabernacle and a bust of Saint Paschal Baylon, and a painting that portrays Saint Joseph with the Child Jesus by Giacinto Diano, dated to around 1790 and belonged to Stella Maranca Antinori family. This room also exhibits works just restored or waiting to be restored.

9.1 Neapolitan area of interest, Vestments, before 1839, red satin embroidered in silk and gold , from the Cathedral of Lanciano 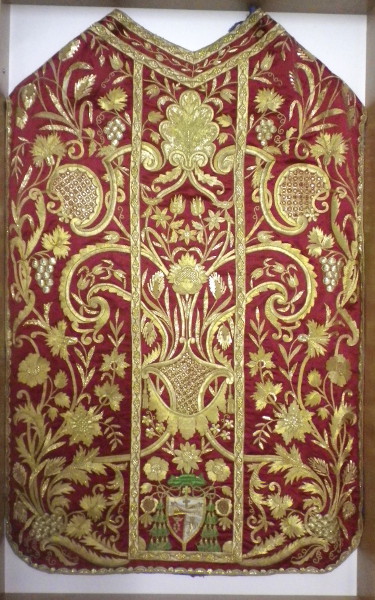 Francesco Maria De Luca, a Neapolitan Franciscan, who was the Archbishop of Lanciano between 1818 and 1839, left a rich heritage of vestments to the Frentano church that includes copes, chasubles, mitres, dalmatics and stoles which are partially exposed and were used for the different liturgical celebrations. These vestments stand out for the variety of colours, depending on the seasonal liturgical use, for the richness and refinement of the fabrics and the needlework, and for their extraordinary state of conservation.

The crosier was created in 1940 for Mons. Alberto Carinci, born on 27th March 1899 in Lanciano. After completing his studies in Chieti seminary, he was ordered priest in 1922. On the 25th March 1940, he was nominated bishop of Isernia-Venafro and became Apostolic administrator of the diocese of Bojano-Campobasso in October of 1943 obtaining full authority in 1948. He died in 1983 and was entombed under the altar of the Sanctuary dedicated to Our Lady of Sorrows in Castelpetroso which was built thanks to his diligence.

9.3 Southern area of interest, the bust of Saint Apollonia, 17th century, carved, painted and gilded wood, from the Church of S. Agostino in Lanciano 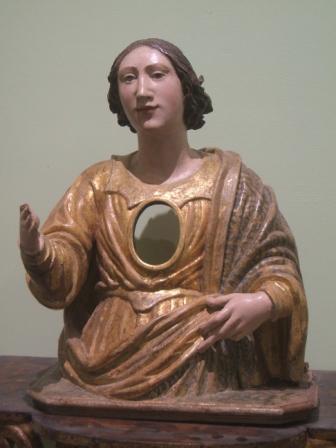 The bust was originally intended to contain a relic of this Saint from Alexandria who was very commonly venerated and invoked to cure an extremely common pain as toothache. For this reason she was frequently portrayed while gripping a tooth in a set of tongs. The tradition, mentioned in a tale by Eusebio from Cesarea, refers to her martyrdom, when she had all of her teeth shattered and for this reason she has been regarded as the patroness of dentistry. Her Saint’s day is on the 9th February. Pope Pio VI is said to have ordered the collection, all over in Italy, of all Saint Apollonia’s presumed teeth and their exhibition to the public devotion; they filled a trunk of three kilos proving the widespread veneration for this Saint.

9.4 Southern area of interest, the bust of Saint Cordula, 17th century, carved, painted and gilded wood, from the Church of S. Agostino in Lanciano 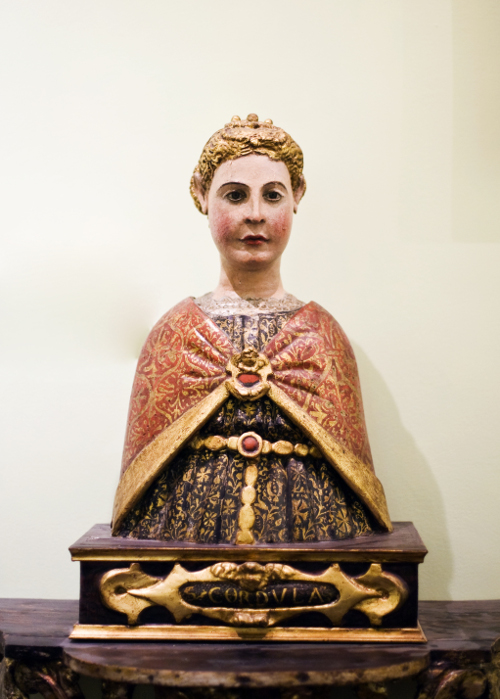 Saint Cordula was invoked as one of the patron saints of our City, as it’s proved in the Ancient Chapter of the City of Lanciano dated 1592, conserved in the Archivio Storico Municipale of Lanciano . Her figure has become object of deep and sincere veneration over the last centuries; she was a friend of Saint Ursola , whose life events and legendary story of martyrdom she followed. The legend of Saint Ursola and the eleven thousand virgins who died with her was very successful during the Middle Ages and it inspired a lot of literary compositions and artworks, among them the famous Memling’s work in Cologne and the pictorial cycle by Vittore Carpaccio, conserved in the Gallerie dell’Accademia in Venice. In 1106, during the enlargement of the city of Cologne, near the Church of St. Ursula, a cemetery was discovered and the bones found there were considered as belonging to these martyr virgins. The discovery of these supposed relics of St. Ursula and companions, among them St. Cordula, led to their transfers in many European Countries as Germany, Italy, Spain, France, Denmark, Poland and others, where the cult spread so rapidly that during the 17th century twelve churches asserted to possess the body or the head of St. Cordula so that it might be thought that among the eleven thousand virgins there were several ones with the same name. 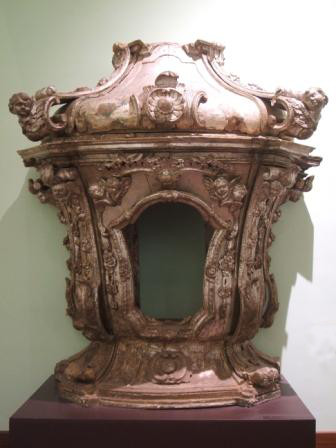 Modesto Salvini was born in Orsogna in 1741, son of Giovan Angelo and Anna Maria Montanaro. He was a qualified cabinet maker and author of various pieces that are conserved in different churches in Abruzzo. Among them the ones that certainly stand out are the pipe organ and the pulpit, created between 1769 and 1774 for the Church of S. Francesco in Lanciano that conserves also this tabernacle which maybe was originally collocated on the high altar and must have been removed during the construction of the altar of the Holy Relics in 1902. 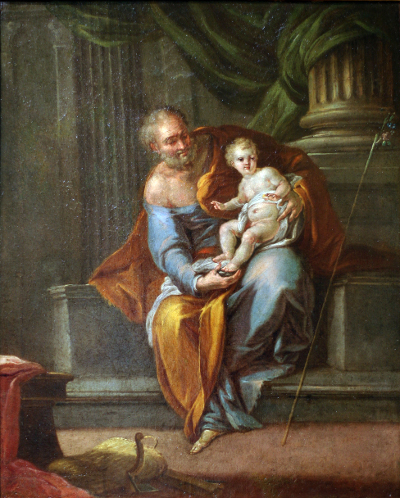 In order to complete the paintings in the Cathedral of Lanciano, at the end of 18th century, Giacinto Diano must have also created art works for private customers as Maranca Antinori family, that also owned one of his pendant painting, now owned by the nuns of the Order of the Sacred Hearts , to whom it was donated with the rest of whole inheritance by the last descendants of family, Donna Marianna, Donna Assunta and their brother Filippo who was a well known professor of Roman Law in the University of Bari, in order to build a rest home for older people. 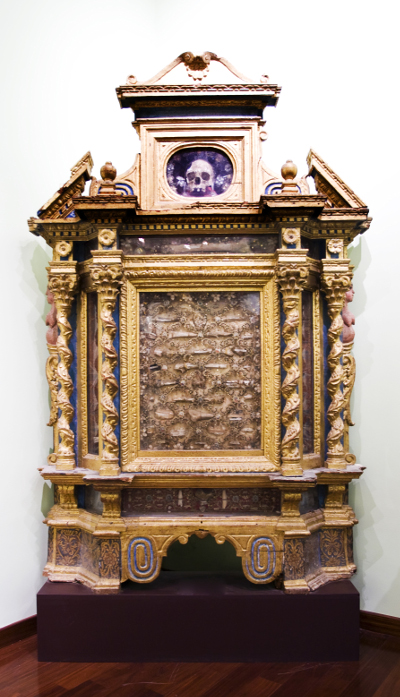 This particular Altar screen represents an unicum in the Diocesan artistic patrimony, which includes more than forty thousand objects that, once were widely spread proving the importance of the veneration of the relics of Saints. Among the hundreds of bone fragments, labelled with a scroll with the name and sometimes with a picture , the head of St Venturina, above, and a bone of St Cordula, below, stand out. Besides the precious reliquary bust already examined, in Lanciano the body of this saint was venerated in the Church of the Poor Clares and it was linked to a particular belief according to which her bones started creaking when one of the sisters was close to death.