THE WORSHIP OF THE VIRGIN AND SAINTS

In the third room the theme of the worship of the Virgin and the Saints is introduced. All the paintings exhibited, in connection with the theme, belong to the same author from Ortona, Pasquale Bellonio born in 1698 and died in 1786 who, although not really outstanding in the painting field for his abilities, had for sure a lot of designations and was particularly significant in showing his mastery in the iconographical connotation.

With the  Virgin and the Saints as subject,  we can admire a triptyque representing the Virgin Annunciation, Nativity and Assumption, and two extraordinary candle-holder lions from the end of 16th  century in carved, painted, gilded wood. 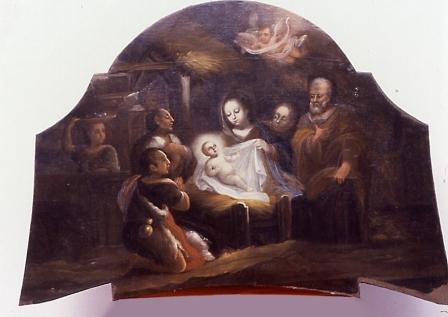 The painting, with the Annunciation and the Assumption, fringed the Altar Piece of the main Altar in the Madonna degli Angeli Oratory, next to the De Archangeliis’ Palace in Via Cavour. Founded in 1584 by the Lancianese Giovanni Giacomo Romano, the small chapel was assigned to the Fathers of the Rome Oratory  and later run by Santa Maria Maggiore priests. In the half of 18th  it underwent an important reconstruction intervention and the internal part was covered in plaster decorations by Michele Clerici. 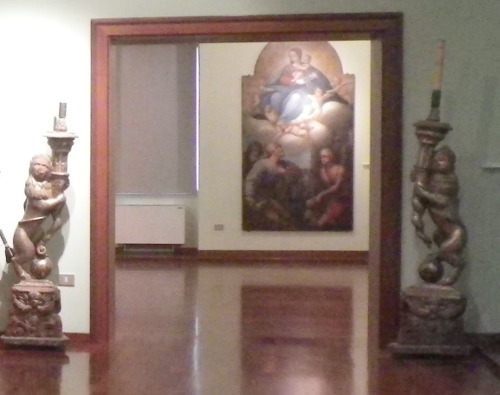 It’s difficult to establish with certainty the original collocation of these two wonderful candle holder lions from the late Renaissance, because  S. Agostino Chuch has gathered a lot of artworks coming from the parishes suppressed after 1827.

Their particular value and their beauty must have been recognised also in the past making their conservation possible until nowadays.