In the seventh room there are many and different “dressed statues”, popularly called “conocchies” whose head and hands were the only parts generally made in wood. Very popular in the past centuries they became old-fashioned after the Vatican Council but they were connected to particular expressions of faith, above all in popular and private areas.

The many little statues of Our Lady of Sorrows come, in fact, from private collections even if there are other subjects as Saint Anne with Child Mary, example of 18th  cent. Neapolitan manufacture and a Saint Nicholas from Bari dressed in paper.

Among the different pieces exhibited, a particular importance is given to Saint Clare’s ones, half of 19th cent. and Saint Anthony from Padua of the 18th  cent.

The statue is bigger than a full-sized one in order to make it commensurate with  the dimensions of the  recess where it was placed once in the Monastery  of the Poor Clares. The Church, of medieval foundation, was completely reconstructed in the half of 19th cent.; inside, the Church was decorated in the 1854 with fine plasters by Demetrio Tenaglia from Orsogna, while the external part was concluded in 1855. It is possible to date to around those years also the realization of this work recently restored, both in the wooden parts and in the monastic habit that, besides the visible part, it is also equipped with all the generally hidden accessories, such as bustier and petticoats.

The Saint holds a sphere-shaped  pix in gilded metal. The pix, that is  also in the emblem of the Order, is the iconographic element identifying Saint Clare and is  present on the portal of the Church and on the tympanum of the main altar.

This element, other times substituted with an ancient monstrance, is associated to the Saint of Assisi in reference to an episode of her life. Saint Clare (Assisi, 1193/1194 - Assisi, 11th  August 1253), whose memorial day is celebrated on the 11th  of August, was famous for her cult for the Eucharist according to which her biographers told that, when Assisi was besieged by the Emperor Frederick II’s  army, that included also Saracen militias, the Saint who was sick in that period was brought to the city walls holding the pix  with the Blessed Sacrament in her hands and, at that sight, the Saracen soldiers retreated. 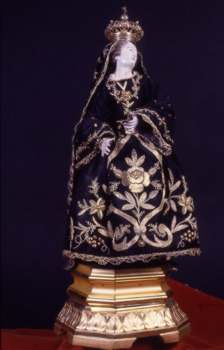 The once very popular worship for Our Lady of Sorrows had also private implications and it was quite common to find statues like this kept at home, generally in bedrooms, proving to be objects of a family devotion now forgotten. Bigger or smaller, richer or more modest in clothes and decorations, almost always made of precious materials, they were daily interlocutors  in a world in which the contact with the divine passed actually through rituals as the creation of little clothes and the dressing, and through material testimonies of a Faith lived in quite overpowering way. 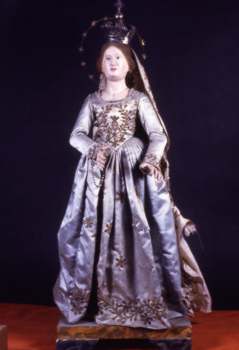 This little simulacrum with its original dress is also offered as a testimony of fashion and customs. The dress, very delicate, entirely made of silk and in a perfect state of conservation, is the most evident element that allows dating the little statue back to the 18th  cent. Its state of conservation demonstrates also, if there were still any need, the care and the attention it has been paid over the centuries.